Furlough time is when a missionary leaves their home of service and spends time back in their home from which they have been sent. I arrived back in the US in November 2017 to spend this time recovering, working, visiting and recruiting. No matter how many months this furlough time is, it somehow passes quickly with things, sadly, still left undone and people left unseen.

I started my time at home with my parents in Kenosha, WI. Six weeks later I a major surgery (donated a kidney to a friend) and spent the next six weeks recovering. (It turns out that when the surgeon tells you it will take 6 weeks to recover, that number isn’t just for people over 60, but does, in fact, apply to you personally!!) In mid-January I moved back to Louisville and began working at the hospital where I did my Pediatrics training. Thankfully, the hospital has always been kind enough to let me slip back into the department and fill-in gaps in various places including the Emergency Department, the hospitalist service and Heme/Onc.

I did a fair bit of traveling during my time at home as well. I was able to visit Canada for the first time (I know, I know…..how did it take me this long to go to Canada?!) and visiting Banff national park while meeting up with friends and supporters (who are also friends!). I was able to take a trip to see one of my aunts and her family as well as my grandmother. It was a bitter-sweet reunion as I realize that I may not see her again this side of heaven. I told her to wait for me to come back again from Africa in 2-3 years. Her response: “Maybe you can just write me a letter.” She longs to see the Lord and her husband of 50 years. Who can argue with that? 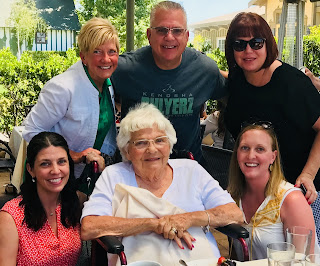 Time at home was also made particularly sweet by being at my church home. Despite several trials our church body has gone through recently, there is a comfort of being present during that suffering, opposed to just hearing about it from afar. We are also blessed to have a growing missions department with a supportive staff including missionary counselors and prayer staff. Our first ever missions retreat took place in mid-October where all of Sojourns missionaries gathered together at a “central world location” for a time of teaching, prayer, debriefing and fellowship. It was an incredible time to get to fellowship with missionaries all over the world, all serving as members of one church body.

As my time on furlough was coming to an end, I was asked by Samaritan’s Purse to fill in for a month as a staff doctor at the Rohingya refugee camp in Bangladesh where they had set up a cholera center. I started my time in Togo working for SP and had been following the situation with the Rohingyan refugees very closely, since their displacement from Burma back in August 2017. This refugee camp has been the largest in the world as it overflows with 1.2 million people. I wish I could better describe what is it to look out and see that many people living in temporary bamboo, tarp and tin dwellings in a square mileage not meant for this purpose. There is a heaviness to it all as a solution to all the needs seems impossible and never-ending.

During my time at the clinic, we ironically did not have many patients. It was a good problem to have as groups had gone through the camp several times to do cholera vaccine campaigns. The blessing is that it worked! The hard part was that we were a cholera center! JThe clinic has since transitioned to urgent care, but during my time there, we took advantage of the low census by building into the nurses, WASH staff and translators we employed at the clinic. I spent a lot of time teaching and a lot of time simply hearing peoples’ stories. One of the translators who is also one of the Rohingyan refugees started playing a song on his phone one day. I recognized the song immediately and was taken off-guard that he had it on his phone—complete with youtube video displaying all the words. Kari Jobe’s “I am not alone”, was playing loudly and confidently from the phone of this Muslim, Rohingyan man’s phone! You can imagine my surprise. I asked him, “Where did you get this song?” He said, “it is my song.” I replied, “ yes, but who gave it to you?” He said again, “It is mysong. It is for me.” I realized that the English barrier was not going to be overcome, and he began to sing and show me the familiar lyrics:

I have no doubt that however he got that song on his phone, it was a gift from the Lord.  Later in the month I was invited to have a meal in his home. Another person and I ate together with our friend from the clinic as his wife, mother and children looked on. (this is customary. Even in Togo, the wife and family will not eat with the guest, but wait until they have finished and eat after they leave). It was a humbling experience. He read my face and told me, “do not worry that we are refugees.” The honor of hospitality in many countries is far beyond that of our own country, and it’s a hard pill to swallow.

We later had the privilege of watching him read Luke in his own language for the first time ever. Pray for him and his people, that during this difficult time, the Lord would draw them to Himself.

Lastly….. I am back in Togo! I arrived on September 4thand have already been back to work for the last couple weeks. More on that later though. I want to thank all of you for praying for my time at home--including time for emotional, physical and spiritual recovery. I also want to say that there are many of you I was unable to see and visit with during my time, and for that I am very sorry.  You will surely be among the first I see on the next time back in the US! Please continue to pray for the Hospital of Hope and all of our national and ex-pat staff serving here.

Kelly
I am a Pediatrician who completed my training in Louisville, Kentucky in June 2011. I arrived in Togo on April 1, 2012 to serve as a medical missionary. I was part of a two year Post-Residency Program with World Medical Mission/ Samaritan's Purse, that completed in May 2014. I am now a full-time medical missionary with ABWE, serving in Mango, Togo and am raising support for finances, prayer, and encouragement. Please contact me to learn more about how you can help!

YOU CAN GIVE ONLINE!